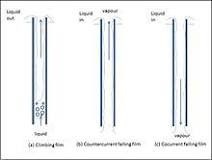 For the climbing film evaporators, the feed is introduced at the bottom of the tubes. Evaporation causes the vapor to expand thus causing a thin film of liquid to rise along the tubes. The vapor shear will push the thin film to climb up the wall of the tubes.